I started this post two days ago and have been dithering about putting it up ever since, but I've counted no fewer than five articles and posts online today on the subject so I might as well toss in my two cents -- Ed.

The new editor of The Monthly started work yesterday. 23-year-old Ben Naparstek, who first offered publisher Morry Schwartz his services as editor when he was eighteen, doesn't seem from my idly curious and fairly desultory Googling to be the kind of chap who thinks he needs any luck, nor indeed the kind who will be too bruised to cope with whatever eventuates, but I wish it to him anyway. If Duke University Press is publishing a book called The Jacqueline Rose Reader co-edited by Naparstek and Justin Clemens, then there is no question but that he is every bit as brilliant as people are saying.

Still, for the peculiar job of magazine editor, at least of this or any national and/or culturally-based mag, not even brilliance will always get you over the line. Schwartz's remark that he himself was 23 when he started his own business was touching but not entirely to the point. Different skills are required. As an editor -- at least of a magazine like this -- you need to have very broadly based general knowledge in order to save your contributors from making ridiculous or expensive mistakes (including an eye for what might be against the law), and you need to be able to communicate tactfully but effectively both with your editorial board and with your contributors, many of whom (in both groups) are delicate flowers.

And both of these things can be acquired only by glacially slow accretions, through experience of the kinds it's very difficult to just target and then go out and get. When, for example, a past-it politician and author of a dull, dud book asks you on television whether you will publish an essay by him, your mad debating skillz and general chutzpah should easily get you through that quagmire of a moment, but the only thing that will get you unscathed through its aftermath, whatever that might prove to be, is life experience.

A number of commentators appear to think that it is somehow the Monthly editor's job to 'stand up to' editorial board chair and heavy-on contributor Robert Manne and publisher Morry Schwartz, something to do with a vague notion of editorial independence. I don't think people have thought this through, quite. Unless her or his magazine is a declared organ of either, an editor needs to be independent of (a) corrupt financial interests and of (b) the state, both for obvious reasons. But in the case of The Monthly, as Morry Schwartz has recently had cause to point out, it's his mag and the editor is his employee. If people don't like a magazine, they are entirely free not to read it. Critique the content qua content by all means, but criticising an editor for lack of 'independence' on a project like this doesn't really make much sense, and indicates a lack of understanding about what an editorial board is for.

That said, it's clear from recent events at The Monthly that the new editor is going to have to fight very hard for things that he wants but that Schwartz and/or Manne are less enthused about. He's also going to have to make allowance for commissions that have been put in place without his knowledge -- and nothing screws up the pre-planning of an issue quite like a long, topical piece by a big name that you didn't know was in the pipeline. In general he's going to have to keep one eye in the mirror, through the doorway and over his shoulder while focusing the other on the four issues that must be thought about simultaneously (the one about to go to press, the one you're in the process of marking up, the one you've mostly commissioned, and the one whose contents are in the planning stages) when running a monthly magazine.

The other place I think the new editor might run into some trouble -- as most editors do anyway, but extreme youth can only exacerbate it -- is with contributors and their contributions. Most writers are fairly highly literate, strangely enough, with decades' worth of experience in working, as professional readers and writers, with language and ideas. And most writers' attitude to being edited approximates something the late great Angela Carter once said about it: 'As if one would not have written it that way in the first place, if that was what one had wanted to say.'

So my very first thought -- as so often -- on hearing of Naparstek's appointment was of a passage in my perhaps all-time favourite ever book. I found it immediately to quote here because it's flagged with a yellow sticky and identified by pencil marks. The pencil marks date from 1968, when I was fifteen, so anyone thinking I'm being anti-yoof here can think again. To me, at fifteen, this passage was both a warning and a reassurance. The intervening decades have borne out its truth and wisdom.

There is a thing called knowledge of the world, which people do not have until they are middle-aged. It is something which cannot be taught to younger people, because it is not logical and does not obey laws which are constant. It has no rules. Only, in the long years which bring women to the middle of life, a sense of balance develops. You can't teach a baby to walk by explaining the matter to her logically -- she has to learn the strange poise of walking by experience. In some way like that, you cannot teach a young woman to have knowledge of the world. She has to be left to the experience of the years. ... And then ... she can go on living -- not by principle, not by deduction, not by knowledge of good and evil, but simply by a peculiar and shifting sense of balance which defies each of these things often. She ... continues henceforth under the guise of a seventh sense. Balance was the sixth sense ... and now she has the seventh one -- knowledge of the world.

The slow discovery of the seventh sense, by which men and women contrive to ride the waves of a world in which there is war, adultery, compromise, fear, stultification and hypocrisy -- this discovery is not a matter for triumph. The baby, perhaps, cries out triumphantly: I have balance! But the seventh sense is recognised without a cry. We only carry on ... riding the queer waves in a habitual, petrifying way, because we have reached a stage of deadlock in which we can think of nothing else to do. ...

Guenever was twenty-two as she sat at her petit point and thought of Lancelot. She was not half-way to her coffin, not ill even, and she only had six senses. It is difficult to imagine her. 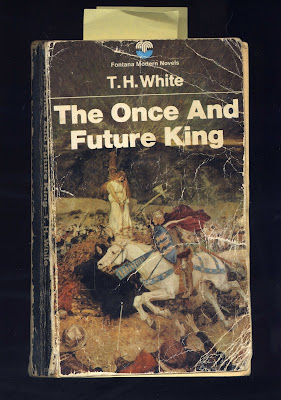 Yes. Yes it is. I'm sure we all wish we could be 23 again, except somehow magically armed with the knowledge of the world that we have so slowly and painfully acquired since. Being 23 has all the myriad advantages of being bright of eye, bushy of tail, and young enough still to believe that the world is one's oyster, and contains a pearl.

Cross-posted from Still Life With Cat
Posted by Kerryn Goldsworthy at 6:44 pm No comments:

A note on Australian cinema

Neil Cross's novel Burial (which is neither Australian nor cinema, but bear with me) made me feel sick for the same reasons some of the Barbara Vine ones do and it was not a good thing to be reading in the same 24 hours as watching Wolf Creek, about which I kept thinking the allusions to Picnic at Hanging Rock were very well and subtly done, not least the riveting presence of John Jarratt in two movies over 30 years apart. That thought was a kind of distancing/defence mechanism, I think. Thank God I watched it on commercial TV with ads to break it up or my heart would have given out.


Cross-posted from Still Life With Cat
Posted by Kerryn Goldsworthy at 6:40 pm No comments:

The chalice from the palace has the pellet with the poison

For a raft of reasons, some of them going back many years, I have been following the saga of (ex-) editor Sally Warhaft's precipitate departure last week from The Monthly -- most recently in a piece by regular Monthly contributor Gideon Haigh in today's Age -- with feelings not so much mixed as puréed. Let us say that I can see both sides of this story, and that I would very strongly recommend that the urgers on the sidelines saying 'Oh, it's only a storm in a teacup' (or saying anything else, really) when they don't actually have a clue what happened should treat themselves to a nice hot cup of STFU.
But two phrases keep running through my mind: there's the old maxim 'Least said, soonest mended' (the only person who appears to be paying any attention to this one is Warhaft herself, and more power to her, especially since she is apparently being ambushed at her own house by bottom-feeding paparazzi, among other things); and then there's that potent phrase 'poisoned chalice'. Whoever succeeds Warhaft in that editor's chair is going to have to be very flexible, very grown-up and very laid-back. And only one of these things makes for good editorship.

Cross-posted from Still Life With Cat
Posted by Kerryn Goldsworthy at 2:44 pm No comments:

Labels: Drama, Editing, Magazines, The Monthly
Newer Posts Older Posts Home
Subscribe to: Posts (Atom)
This photo was taken looking south from a crossroads in the middle of Yorke Peninsula, South Australia, which is the bit that looks like a boot: not the elegant heeled boot of Italy, but a humble foursquare working boot. About 300 metres down the road on the left is the gate to the home paddock of the house I grew up in, and another 5 km or so after that, my home town of Curramulka. This is the landscape I was talking about in my story 'Limestone', in North of the Moonlight Sonata.