The Barbara Jefferis Award, discussed in the post before last in the context of a rave about Michelle de Kretser's The Lost Dog, was in the event won by poet Rhyll McMaster for her first novel Feather Man. Which is indeed a fine book, as I've said at some length already here, and which certainly addresses, directly and on a literal level, the empowerment of girls and women.

I don't know, maybe Michelle is one of those writers, like Elliot Perlman, whose work violently divides those who read it. (Perlman, whose very very long and very very detailed novel Seven Types of Ambiguity was treated to an absolute stinker of a review by Peter Craven of the kind Craven had hitherto reserved for Simon During's book about Patrick White, is regarded -- mainly on the strength of this novel -- by the French in particular not only as a very important Australian writer but as a very important writer, period. Other critical responses were dotted all along the spectrum between these two positions. Perlman's book has a dog in it, too; his name is Empson, which is one of the things that enraged Craven.)

Or maybe people think if there's an animal in the title it can't be a serious book. If so, this is sad, for there is a time-honoured and honourable tradition in Australian literature of writing about animals and putting them in your title. A quick trawl through the colourful history of the Australian short story yields the following by-no-means-exhaustive list of titles: 'The Dog', 'The Cow', 'The Bull Calf', 'The Jackass', 'The Dingo', 'The Donkey', 'The Ant-Lion', 'The Galah', 'The Pelican', 'The Seahawk', Tell Us About the Turkey, Jo', 'The White Turkey', 'The Grey Kangaroo', 'The Grey Horse', 'The Black Mare', 'Wild Red Horses', 'The Red Bullock', 'The Red 'Roo', 'The Rainbow Bird', 'The Powerful Owl', 'Singing Birds', 'The Woodpecker Toy Fact', 'The Three-Legged Bitch', 'The Loaded Dog', 'The New Australian Dog', 'Thylacine', 'Serpents', 'Snakes', 'A Snake Down Under', 'The Turtles' Graveyard', 'Goldfish', 'The Mullet', 'The Snoring Cod', 'Getting to the Pig', 'The Woman Who Wasn't Allowed to Keep Cats', 'My Bird', 'His Dog', 'Hawkins's Pigs', 'John Gilbert's Dog', and 'Nobody's Kelpie'.

Perhaps some people may think The Lost Dog "about" (and only about) a dog, and "therefore" can't be Art. Perhaps some people may have forgotten the extraordinary power of the animal symbolism in the work some of the 20th century's great writers -- Lawrence's foxes and horses, Woolf's spaniel, Hemingway's bulls and fish, Les Murray's magical animal poems, Coetzee's dogs and frogs and other critters of all kinds and the absolutely deadly serious life philosophy behind his representations of animals and our relations with them.

For we are lucky enough to have in Australia not just one but two truly great thinkers and writers who can elevate these matters to a place where no intelligent reader can ignore the dilemmas they represent even with respect to that most alien of creatures, the bat: Coetzee as a man who fearlessly follows a trail of logic with no failure of nerve and arrives at a radical point of understanding, Murray from a point of view profoundly spiritual, a conception of being and presence arrived at via Catholicism, observation and imagination all at once. Here is Coetzee's tough nut (an old bat, even) Elizabeth Costello, in full flight, on bats and being:

What is it like to be a bat? Before we can answer such a question, [philosopher Thomas] Nagel suggests, we need to be able to experience bat life through the sense modalities of a bat. But he is wrong; or at least he is sending us down a false trail. To be a living bat is to be full of being; being fully a bat is like being fully human, which is also to be full of being. Bat being in the first case, human being in the second, maybe; but those are secondary considerations. To be full of being is to live as a body-soul. One name for the experience of full being is joy.

Now if one were not aware that Les Murray had written 'Presence: Translations From the Natural World' some years earlier than this, his bat-poem would seem for all the world like a direct response, or amplification, of it, as though in conversation with Coetzee which for all I know he has been, in fact it seems very likely. I wish I'd been there.

Sleeping-bagged in a duplex wing
with fleas, in rock-cleft or building
radar bats are darkness in miniature,
their whole face one tufty crinkled ear
with weak eyes, fine teeth bared to sing.

Few are vampires. None flit through the mirror.
Where they flutter at evening's a queer
tonal hunting zone above highest C.
Insect prey at the peak of our hearing
drone re to their detailing tee:

A rare ear, our aery Yahweh.

Posted by Kerryn Goldsworthy at 11:23 pm No comments: 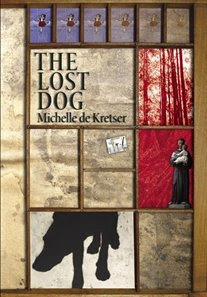 I see from the current Sydney PEN newsletter that Michelle de Kretser's novel The Lost Dog has been shortlisted for the inaugural Barbara Jefferis Award, and the winner will be announced tomorrow.

(This is the prize that caused such a fuss last year when first announced, mainly because it's for women writers only. [UPDATE: My bad, my very bad, for this is completely wrong: it is open to novelists of either or indeed any sex whose book represents women and girls in a positive light; see comments thread.] Oh noes! What about Teh Menz Liberation, huh? Huh? Etc.)

As you can see if you read the link, this is a very handsome prize. Quite apart from the $35,000, there is the warm glow of winning an award named in honour and memory of a woman who contributed so much for so long to Australian literature -- and associated also with her husband John Hinde, long-standing and much-loved ABC film critic, whose will provided for the establishment of the award in his wife's name.

Peace and all to the current Miles Franklin judges, some of whom are mates of mine, but it's a matter of absolute gobsmackedness to me that The Lost Dog didn't even make the longlist for the 2008 Miles F award. It fits the award's criteria (which de Kretser's previous novel, The Hamilton Case, did not), and it's one of the best Australian novels I've read not just over the last year but for a very long time. I've got nothing against the other books that made the Miles F longlist; I just think The Lost Dog is better than most if not all of them -- for all kinds of reasons, but mostly, I think, for its delicate balance of intellectual sophistication and genuine, intense, beautifully realised feeling. That, and the fact that by about three pages in you find yourself thinking 'Oh my, this book was written by a grown-up.'

This is the review of it that I wrote last year for the Sydney Morning Herald:

Tom Loxley is on a kind of rural retreat when his beloved dog goes missing in the bush. Over the course of the story his search for the dog is interspersed with episodes of back-story: the story of his early childhood in India, his cramped teenage years in Australia, his unlucky and thwarted parents, and most of all his strange, tender relationship with the mysterious Nelly Zhang.

Tom is an academic working on a book about Henry James; he has anchored his racially complicated heritage in English literature. This novel is haunted by James in all kinds of ways, not least by a preoccupation with the idea of haunting itself, as well by the idea of yearning. On the surface Tom’s yearning is for the lost dog, and for the beloved who refuses to become a lover, but these things are situational and remediable; what can’t be changed is Tom’s family history and geography, the complex fate of the post-colonial.

This book is so engaging and thought-provoking, and its subject matter so substantial, that the reader notices only in passing how funny it is. At one point Tom goes to ask the neighbour Corrigan to keep an eye out for the dog, whereupon the narrator produces a sentence worthy of Patrick White: ‘When the Australian desire to provide assistance meshed with the Australian dread of appearing unmanly, it produced the bluff menace that was Mick Corrigan’s default setting.’

Michelle de Kretser is one of those rare writers whose work balances substance with style. Her writing is very witty, but it also goes deep, informed at every point by a benign and far-reaching intelligence. She is still winning prizes for her 2003 novel The Hamilton Case and she is certain to win a few more for The Lost Dog. Publishers Allen and Unwin have shown their faith in her by publishing this novel as a beautifully-designed hardback.

But I only had a 320-word space and they're meant to be brief, lively, accessible shorts; if you want a good, serious, insightful, detailed critical response, go and have a read of James Ley's full-length review in the Age. (Whenever I hear someone say 'Oh but Peter Craven is the best critic in the country', I have a little smile to myself, because while there are things about Craven's writing (not his criticism, so much) that I do admire very much, it's quite obvious to me that the best critic in the country is in fact James Ley.)

And just as an added bonus, that beautiful cover and design are courtesy of the lovely and talented Ampersand Duck. What more could any reader possibly want? Here is A. Duck's fabulous post about working on this novel; give yourself time (a cup of coffee, say) to read and savour this lovely detailed post.

Posted by Kerryn Goldsworthy at 11:14 pm No comments:

Labels: Books, Fiction, Prizes
Newer Posts Older Posts Home
Subscribe to: Posts (Atom)
This photo was taken looking south from a crossroads in the middle of Yorke Peninsula, South Australia, which is the bit that looks like a boot: not the elegant heeled boot of Italy, but a humble foursquare working boot. About 300 metres down the road on the left is the gate to the home paddock of the house I grew up in, and another 5 km or so after that, my home town of Curramulka. This is the landscape I was talking about in my story 'Limestone', in North of the Moonlight Sonata.