Back from the abyss

Appearances to the contrary, I have not abandoned this blog. It's just that very little happens in the Aust Lit world over the Christmas/New Year break. But it's time to start sorting out one's working life v. one's Arts Festival program on a detailed daily basis (I have already made one bad double-booked blue here) and that means getting organised for Adelaide Writers' Week.

The Australian names I have ticked on the program as absolute must-sees include Robert Drewe, Delia Falconer, Helen Garner and Gail Jones, all of whom are Not From Here (which means I rarely get to see or hear them), and are not only exceptional writers but can be absolutely 100% counted on in any given public forum to have prepared carefully, to engage fully with whatever panel they're on and whoever is interviewing them, and to be interesting and civil no matter how brutal the hecklers or the weather.

Gail Jones has a new novel, Dreams of Speaking, that I think is even better than Sixty Lights. It's due out in February, so it will be particularly interesting to hear her talk about -- and, one hopes, read from -- that.

My deplorably predictable picks of the OS guests include Margaret Drabble, Val McDermid, Vikram Seth, Minette Walters and Simon Winchester, but that says more about my patchy knowledge than it does about the others on the list. What's happened at every writers' festival I've ever been to is that some totally unexpected star emerges and charms everybody. In 2000 it was US writer and academic Michael Ignatieff, now in politics, about whom there was a huge buzz by the end of the week.

I'm about two-thirds of the way through Minette Walters' Devil's Feather and it's reminding me why I stopped reading her stuff: while brilliant, it is too deeply creepy and weird to read for unadulterated pleasure. I managed to finished American Psycho -- yay me -- so can claim a reasonably strong stomach, but Walters is a much more sophisticated manipulator than Easton Ellis of narrative pace and of psychological extremes. Too often her message, or one of her messages, is that there is simply no place to hide, and this just is not something that I wish to know.

Often the first week of March in Adelaide is summer's last gasp, and since Writers' Week is still held at an outside venue, it can get pretty brutal. But it's never as bad as what usually happens at the Melbourne Writers' Festival*, with the August ice and sleet pelting down outside the Malthouse and five thousand people huddling in the indoor space, shouting at each other in order to be heard, pushing each other out of the way in the staircase queues and stinking of wet wool. True, the Adelaide punters tend to smell of wine and sweat by the end of a brutal day -- but at least we're outside.

*Note position of apostrophe. Robert Dessaix was once seen to look up from a program on which was written 'Melbourne Writer's Festival' and inquire gently 'Who is this lucky writer?' 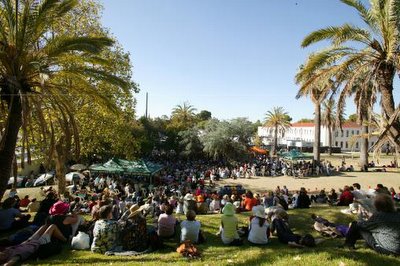 Image from here, where there's also a full list of guests.
Posted by Kerryn Goldsworthy at 12:35 pm 5 comments:

Newer Posts Older Posts Home
Subscribe to: Posts (Atom)
This photo was taken looking south from a crossroads in the middle of Yorke Peninsula, South Australia, which is the bit that looks like a boot: not the elegant heeled boot of Italy, but a humble foursquare working boot. About 300 metres down the road on the left is the gate to the home paddock of the house I grew up in, and another 5 km or so after that, my home town of Curramulka. This is the landscape I was talking about in my story 'Limestone', in North of the Moonlight Sonata.